Songwriter, Cole Porter, began his celebration of falling in love by reminding us that "birds do it." It’s no surprise that Porter chose birds as his first example, because their courtship practices can be as entertaining as they are complex.

Bird courtship displays are integral to mating and raising young. Males use a vast array of techniques to draw the attention of females. With some species, the male simply flies in front of the female to show off his luminous colors or unique markings. In others, songs are more important, and a male will mimic other songs he’s heard, apparently to impress the female with his "playlist." 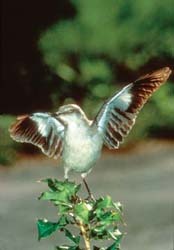 Female birds usually choose suitors with the best genes and make their selections based upon criteria ranging from appearance, to the ability to provide, to evidence that the male can build the strongest and safest nest.

In some species, birds engage in behaviors that seem to parallel human romance. Cranes are well-known for dancing during courtship. Some birds touch bills or groom each other while evaluating their suitability as mates. Male jays and cardinals often present sunflower seeds to their potential mates.

Birds also approach "faithfulness" very differently. While most birds mate for a single season, some will mate multiple times during a season, and a handful of others – such as geese, swans, and eagles – will have only one mate until one of them dies.

Recent research shows that some species actually have multiple mates simultaneously. For example, after hummingbirds mate, the male will court and mate with another female. House Wrens build multiple nests and let the female choose the one she prefers. After they mate, the male may try to attract another female to occupy one of his other nests. It’s difficult for the male to care for multiple broods, unless the habitat is rich in resources.